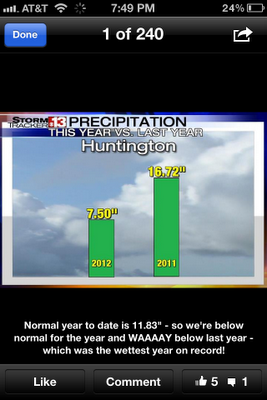 A friend texted this picture to me this week (thanks, Terra!) because it made her think of Carys. I knew we had a lot of rain around the time that the babies were born, but I didn't realize we had THAT much rain. Yesterday, I had a client reference this time last year, "you know how we had all that rain this time last year?"

How fitting is that?


It certainly was the rainiest time of our lives...

Yet here we are, and tomorrow my baby boy turns one. Tomorrow also marks one year since our daughter went to Heaven. Bittersweet, as always. I've been feeling like laughing and crying at the same time, which happens often these days it seems. It's all part of the journey, and what a very painful, beautiful, joyful, sorrowful, rainy journey it has been.

Exhaustion and Rays of Sunlight

It's so hard to explain how many ways our storms have impacted us since December 2010. I know things will never be like the were, but sometimes I wonder if the floodwaters will ever go back to pre-storm levels. It's not nearly as deep, and the sun shines more often, but it's hard to clean up when I keep stepping in puddles. 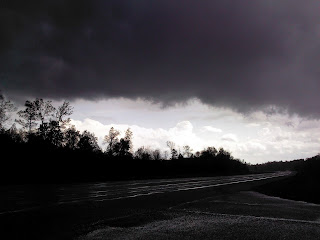 This whole journey has left me so exhausted, I find myself frequently longing for peace and rest in Heaven. I know God still has a purpose for me here, and I'll keep working at it, I'm just so tired. I've found that situations that may have been minor before now remind me just how exhausted I am. Stress, conflict, expectations that may not be realistic... I don't have the energy for them I once did. It all still impacts the way we make decisions in general.


However, now I have a very clear idea of the direction I want to be headed, and I want peace. I know we are still making progress in our recovery from the storms. I don't seem to be in the fog anymore, and we're on a mission. We're picking up the pieces and slowly moving forward, even if we're not back to be full pace yet.

With the weather lately, I've been seeing some beautiful artwork by God's mighty hand. The next photos in this post are from recent moments that seemed to represent to me where our journey is now. The rain and dark clouds are still around, but I'm seeing some rays of sunlight 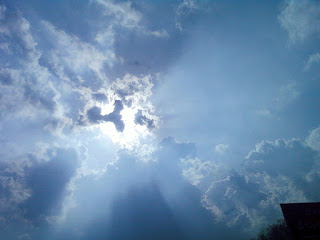 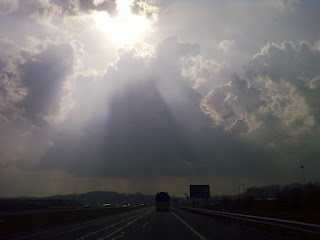 I think sometimes we take our knowledge of hope and of Heaven for granted. It's easy to grieve what's missing in this moment because our limited human minds have trouble understanding eternity.

Maybe we don't say it, but sometimes we act it.

I've been thinking a lot about last Easter (read last Easter's post here). We'd just said hello and goodbye 3 days before, and I was still in the hospital after the C-section. My spirit is still willing and my flesh is still weak, but I'm so thankful that we still have the hope of Heaven.

As we were getting up to attend sunrise service this morning, I thought of how miserable the walk to the tomb must have been. After facing significant loss, I have a better understanding of the heartache that must have been felt.

1 On the first day of the week, very early in the morning, the women took the spices they had prepared and went to the tomb. 2 They found the stone rolled away from the tomb, 3 but when they entered, they did not find the body of the Lord Jesus. 4 While they were wondering about this, suddenly two men in clothes that gleamed like lightning stood beside them. 5 In their fright the women bowed down with their faces to the ground, but the men said to them, “Why do you look for the living among the dead? 6 He is not here; he has risen! Remember how he told you, while he was still with you in Galilee: 7 ‘The Son of Man must be delivered over to the hands of sinners, be crucified and on the third day be raised again.’ ” 8 Then they remembered his words.

9 When they came back from the tomb, they told all these things to the Eleven and to all the others.10 It was Mary Magdalene, Joanna, Mary the mother of James, and the others with them who told this to the apostles. 11 But they did not believe the women, because their words seemed to them like nonsense. 12 Peter, however, got up and ran to the tomb. Bending over, he saw the strips of linen lying by themselves, and he went away, wondering to himself what had happened."

The women had forgotten Jesus' words until reminded. I don't think they had ever really grasped what it was that Jesus was telling them about eternity, or maybe they just thought of it as something that was so far into the future they didn't even need to think about it. They didn't even realize what hope they had! They weren't much different than us, were they?

The passage above says the apostles didn't believe the women because their words seemed like nonsense. "Peter, however, got up and ran to the tomb." Oh, how I wish I knew what was going through Peter's mind. I look forward to asking him some day!

Some commentaries say that Peter wasn't thinking of the resurrection but I have to believe as he wondered, or marveled to himself, he felt his hope begin to rise. Even if he didn't fully understand Jesus' words until Jesus, Himself appeared to the disciples and "opened their minds so they could understand the Scriptures" (Luke 24:45), I believe he was starting to understand just how monumental what he'd just experienced actually was. I believe he was beginning to grasp the hope that Jesus so clearly represented.

I'm so thankful we have hope. I can't say that enough. This world may separate us one way or another, but Thank God, I still believe that Heaven is real, and we have a Heavenly Father who loves us. I still believe.

Happy Resurrection Day, Heaven is Real!!!
HE IS RISEN!!
2 comments:

I'm definitely feeling like a maranomi tonight. I'm feeling very nostalgic and missing Carys. It's April. Later this month, we will be celebrating one year since our babies were born.

Celebrating? Is that the right word? It is, because I certainly want to celebrate my babies. It's also painful though. Much of this past year went by in a fog.... like a very long, very emotionally draining dream that, now that I'm more awake, seems very fuzzy at times.

Again, here is the mix of joy and pain I've come to know so well. I'm excited to watch Paxton grow and learn. I'm thankful for my babies. I miss having them both with me and I've been thinking a lot about the short time I had with them both. My heart hurts and longs for Heaven.

Heaven- where I'll be with my daughter and other loved ones, I'll always know peace, and nostalgia doesn't exist.

Even with the painful nostalgia, I know good things are coming and God still has a plan. Pieces are falling into place. I'm preparing to publish my first book, Love isn't Selfish, and I'm working on the second, which is the babies story. We're also working toward 501(c)3 status for The Carys Rainn Foundation (more information to come). I know Carys was given to us for a purpose. God always has a plan.
1 comment: