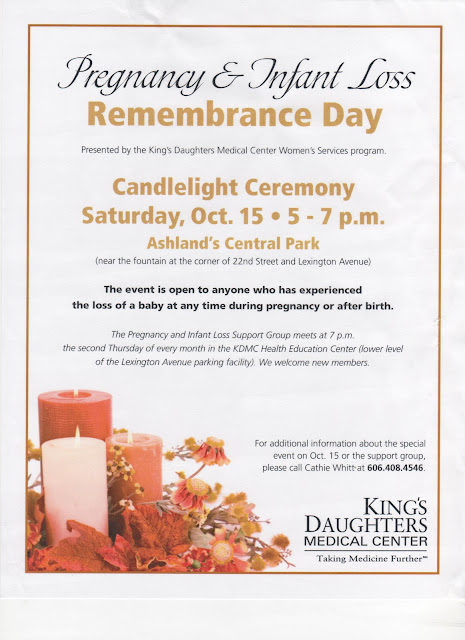 "A person's a person, no matter how small!"

Over the past year, I’ve had much to learn. As we’ve experienced our own grief, we’ve had many people talk to us about their losses. I’ve learned that it’s surprising how many parents have experienced infertility, or pregnancy/ infant loss. It’s a topic that is often avoided because it’s hard to discuss.

I have learned that discussing a baby’s terminal diagnosis or death is often a way to stop a conversation abruptly. Many people don’t know what to say, so they say nothing... or they may say hurtful things simply because they don’t know what TO say and it just comes out wrong when they try.

I’ve learned that although society seems to have come a long way regarding responses to pregnancy and infant loss, there is still a general attitude that a miscarriage or infant loss isn’t as significant as the loss of an adult. Many parents who have experienced a loss are told by well-intentioned loved ones that they need to just get over it and move on. In reality, it’s not that simple.

I’ve learned that it is important for those who have lost babies during or soon after pregnancy to know that it’s okay to grieve. A loss is a loss, and in the wise words of Dr. Seuss, “A person’s a person, no matter how small.”

Even so, for anyone who has not experienced pregnancy or infant loss, it’s hard to understand how much such a loss can change someone’s life. In addition to being told to get over it and move on, many people are led to believe that there is something wrong with them because they are having trouble letting go of someone they never had a chance to meet face to face, or maybe met only briefly. The fact is, as with any loss, it is multifaceted. It doesn’t matter how long you’ve known your child, he or she is still your child and always will be.

From the moment a parent is aware that the child exists, a bond begins to form. Whether the child was planned or not, the parent begins to imagine what life is going to be like – how it will be different. With that first positive line on a pregnancy test, a whole new world of "what-if’s" is opened. A child changes everything. The loss of a child, regardless of age or stage, doesn’t take away that change, but it does take away any chance of knowing how the what-if’s would have been.

I was in love with my babies before they even existed. The nursery was planned long before a test came back positive. I had hopes and dreams for them before they were even here. From the time I knew there were two babies growing inside, though, my love for my children was no longer abstract… there were two tiny people who were the recipients of that love; two little individuals who would develop unique personalities and have unique strengths and weaknesses. Two little people who would need their momma’s love and nurturing as they developed the skills and values they would need to survive and thrive in this world. They were a big part of my world from that moment.

It’s easy for people who don’t understand the significance of pregnancy and infant loss to say, “you really need to just get over it and move on,” because they don’t seem to understand what has been lost. A miscarriage is more than the loss of a bunch of cells. Those cells are life in its earliest stages. Those cells (the beginnings of the growth of a child) represent hopes and dreams of the future. Those cells represent the change that took place in a parent’s heart with the knowledge that a child was forming. A newborn infant isn’t just an acquaintance his or her parents didn’t really know well anyway. She’s a well-loved child who was full of promise for the future of her family and community. He was the one that his parents imagined watching grow and develop into a wonderful, successful adult with their training and nurturing. They are part of us. They wouldn’t have existed without us. They grew within our bodies, even if their lives were short. They mattered.

For parents who have lost a child (no matter how far along in growth) to be told they should be able to just get over it and move on is an anxiety-producing lie. It’s not realistic or healthy. It’s okay to grieve the loss of a child and the hopes and dreams that were lost as well. It’s ok to find ways to keep your child’s memory alive. It’s ok to want to talk about him or her. It’s healthy to find a balance between moving forward and grieving your loss.

This blog was started because I need to be able to talk about my baby girl. I want others to know about what a huge impact she made in our lives during the brief time she had here on earth. I can’t bear the thought of pretending she didn’t exist, because she did. Throughout the pregnancy and for 7 hours and 13 minutes afterward, she lived. She had dark red hair and eyelashes, chubby cheeks and hands, and long skinny feet. She had one little toe that curled under the rest and made me smile. She made sweet little noises and held our fingers. She was here. To “get over it” and move forward as if nothing changed isn’t possible. There will always be a sense of loss. My daughter died, and I miss her.

October is Pregnancy and Infant Loss Awareness month. For those who have lost a child, whether during or after pregnancy, find a way to memorialize your little one. For those who have not, please remember that it doesn’t matter how far along a pregnancy was, a loss is a loss, and it’s normal for a parent to grieve the loss of a child. After all, “a person’s a person, no matter how small.” 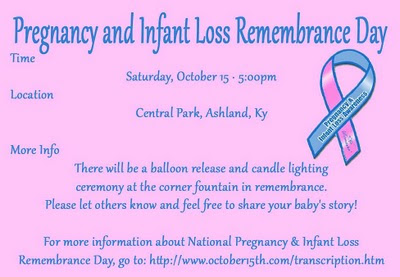